President of World Obesity, Full Professor of Endocrinology at the Catholic University of Rio de Janeiro, Brazil and Vice-Director of the Post-Graduation Medical School. 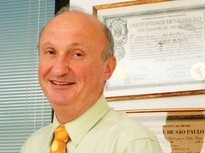 Halpern was a pioneer in developing and disseminating evidence-based approaches to obesity management in Latin America, leading the way to a generation of healthcare professionals in the continent.

He also played a major role in informing the general public and raising awareness to the challenges of overweight and obesity.

Alfredo Halpern leaves a longstanding legacy to obesity management and will be greatly missed by everyone who worked with him.

We offer the only internationally recognised course on obesity management. Read more here.

We offer various statistics, maps and key data around the topic of obesity. You cand find all that and more here.

We have developed five key areas of policy that are a priority to us. Want to know more? Check them out here!