The past 12 months have shown us that health is shaped by many factors outside of our control. COVID-19 and the measures taken to curb the global pandemic have had an impact on everyone’s social, emotional and physical health in one form or another.

It also became clear that specific population groups were more vulnerable and at increased risk of worst outcomes in case of illness due to COVID-19.

Early on in the pandemic, we learned that when coupled with COVID-19, obesity can create significant risks. In fact, increased bodyweight is the second most important predictor of hospitalisation from COVID-19, with only old age identified as more significant. Our new report shows that countries with the highest prevalence of overweight and obesity also have the highest number of deaths: of the 2.5 million COVID-19 deaths reported by the end of February 2021, 2.2 million were in countries where more than half of the population is classified as overweight.  And countries with low levels of COVID deaths are also shown to have low rates of obesity, indicating correlation between the two.

Solutions require new kinds of collaboration and breaking down barriers, both seen and invisible. For World Obesity Day (March 4th), the global obesity community  called on everybody to help us move towards a world of greater understanding, support and policies, building happier, healthier, longer lives for all of us. Because in the end, every body needs everybody.

Recognising the need for global, coordinated action to address the parallel obesity pandemic, World Obesity Federation and World Health Organization (WHO convened an event with over 150 stakeholders around the globe. In his opening remarks, Dr Tedros Adhanom Ghebreyesus’ message, Director General of WHO, couldn’t have been clearer:

"The correlation between obesity and mortality rates from COVID-19 is clear and compelling. Investment in public health and co-ordinated, international action to tackle the root causes of obesity is one of the best ways for countries to build resilience in health systems post-pandemic: we urge all countries to seize this moment."

Everybody together to address obesity

Despite restrictions in place in many  countries, obesity stakeholders all around the world showed their commitment to addressing obesity through virtual and even some in-person events.  Over 100 activities took place around the world. 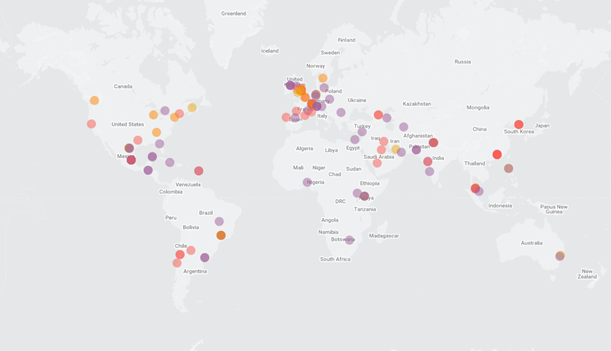 Wellness for Greatness Kenya organised an obesity awareness talk at Makini School Ngong Road Campus in Nairobi. The youth attendees were encouraged to adopt healthier lifestyles while also discussing some of the social and economic impacts of obesity.  On the other side of the Atlantic ocean, the Mexican Obesity Society invited everybody to take part in a virtual race to raise awareness about the impact of obesity.

Participants were encouraged to take a walk around the park or explore their local area and track their journey. Recognising the power of personal stories and shared experience, the Sociedad Uruguaya para el Estudio de la Obesidad ran a social media Campaign ‘Obesity must be treated with conscience and science’ (La Obesidad debe ser tratada con conciencia y con ciencia) which aimed to encourage people to write testimonies about their life with obesity. Each story inspired awareness among patients and professionals, raising the voices of people living with obesity and highlighting their role as the key agent for change in our efforts to prevent, treat and manage obesity globally.

In the US, our members Obesity Action Coalition, The Obesity Society, Obesity Medicine Association and others organised another successful National Obesity Care Week with WOD activities including a webinar on #ScienceforEverybody, while in the EU another successful @EASOobesity policy conference launched the new parliamentary group on obesity, reinforced by language recognising obesity as a disease.  In France, the Ligue Contre l’Obésité organised the Kilometre Challenge to raise awareness about obesity and recorded a total of 35,300.78 km with people engaged across all of the French territories.

While World Obesity Day has had fantastic reach since its founding six years ago, this year the response was truly remarkable and a clear indication that the world wants and needs more action on obesity.  Social media statistics included a 10,000% increase in visitors to worldobesityday.org, while over 6.6  million people were reached by our Facebook page and 6 million views of our 90 second video showed how much enthusiasm and support there was.  While in 2020 we were very pleased that the total potential media reach of our report on missing the targets was 1.3 billion, in 2021 that reach rose to over 7 billion, and the interest has been sustained in the following three weeks with an additional billion or more reached in the following weeks for a current total of 11 billion!

With 800 million people around the world living with obesity, it is urgent that governments around the world include obesity prevention, treatment and management in their recovery plans. The evidence on the close association between COVID-19 and underlying obesity provides a new urgency – and opportunity – for global action. On World Obesity Day, we called on everybody to work together and help transform this moment of crisis into an opportunity for action on obesity.

As we have now passed the halfway point for the Decade of Action on Nutrition, there is a chance to build on the current momentum to reframe issues and initiate global action. As we continue to advocate to reframe the obesity narrative, World Obesity will strive to lead, coordinate, and drive action on obesity globally in 2021 and beyond. By leveraging key moments in the health and political sphere to get obesity on the agenda of high-level political events, we will aim to streamline priority initiatives, empower patients, and support national health systems as they recover from the COVID-19 pandemic. Our window of opportunity to fund an implement actions to ensure better, more resilient, and sustainable health for all is now.

We offer the only internationally recognised course on obesity management. Read more here.

We offer various statistics, maps and key data around the topic of obesity. You cand find all that and more here.

We have developed five key areas of policy that are a priority to us. Want to know more? Check them out here!